Avi Sperber, a graduate of the Technion – the Israel Institute of Technology – is an Israeli traffic engineer and a stone sculptor with an international reputation.

His statues have been displayed in major sculpture gardens and in exhibitions in Israel and all over the world. His work has been exhibited in Venice, Beijing, Prague, Edinburgh, New York, Paris, and London, among others.

Engineering applies science to human needs. The source of the word “engineering” in Hebrew is derived from its meaning in Farsi, where it refers to geometry. Traffic engineering is a field dealing with the interrelationship between transportation systems and the system of human activity and land use. This field touches on the environment and relates to the state of life in the present and to the forecast for the future. The planning of transportation systems uses mathematical models and geometric design to create road systems, interchanges, junctions, railway tracks, curbs, road signs, crosswalks, and so on. All these elements affect the landscape and the environment through appearance, noise, air pollution, the relationship to the urban fabric, nature, and, of course, the quality of life of people.

The discussion of the role of the transportation system and the importance of its correct integration in urban and environmental system’s relies on models for predicting the demand for travel, and on the vision of future development. The planning of traffic and transportation is a multidisciplinary field in close contact with other planning spheres, such as architecture, urban planning, landscape design, geology, etc. Transportation systems have a major effect on people’s way of life and behavior. Installing transportation systems usually involves digging and construction work which influence nature and the urban landscape.

Avi Sperber is a sculptor – in traffic engineering, his formal profession, he is responsible for planning roads and railways. The concept of “mapping” in Sperber’s two-faceted activity as both engineer and artist becomes especially significant in his attitude towards and understanding of the physical environment in which he operates, and obviously also in his sculpture materials, which consist primarily of natural stone.

The current exhibition in the Porter School of Environment and Earth Sciences at Tel Aviv University deals with the artistic translation of the mapping of junctions and interchanges into a series of symbolic stone statues, some of integrate other construction materials, each of which derives a new and original metaphorical meaning with a life of its own. Two-dimensional sketches of the road intersections with which Avi Sperber was associated as a traffic engineer have become new models of three-dimensional stone sculptures that have created a new and thrilling visual language. Some of these works display images of birds or allegorical plant-like outlines. All of them communicate with nature itself.

All of Avi Sperber’s statues are the work of his own hands in his workshop, located in Kibbutz Ein Carmel, where he skillfully removes the superfluous shards from stone blocks.

Some of the works displayed in the exhibition were inspired by the planning of road development, interchanges, and neighborhoods with reference to routes and places mentioned in the Bible. Placing stone statues inspired by junctions and intersections next to the huge glass windows of the Porter Building facing the Ayalon Highway constitutes an intense point of attention. Through them, it is possible to simultaneously perceive an interchange bustling with traffic 24 hours a day, as well as the statues in the exhibition overlooking it.

Doron Polack
Curator of the Exhibition

From Map to Language 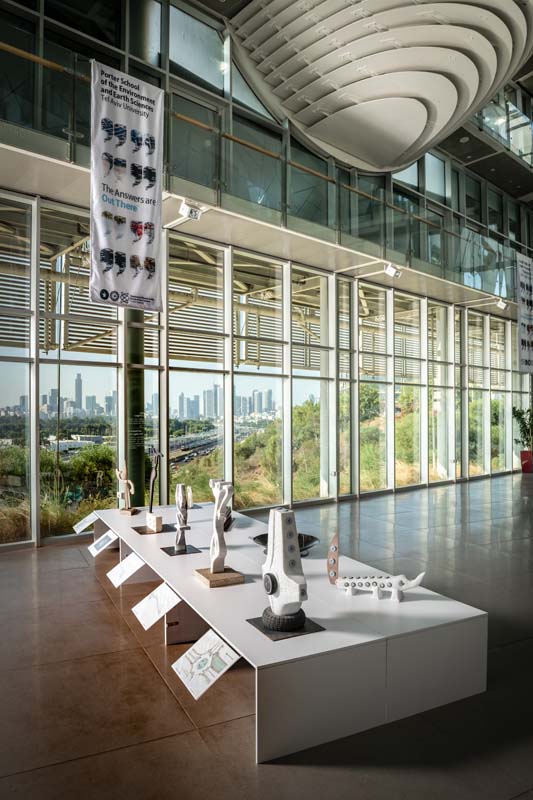 As a traffic and transport engineer I have connections to the fields of traffic planning, architecture, and municipal and environmental planning – all domains dealing with physical, environmental, economic, and social development and affecting modern man.

Traffic and transport engineering engage in the geometry of defining routes for railways, roads, junctions, and interchanges, and adapting them to the environment in urban and interurban spaces.

The products of the planning integration in these fields are two-dimensional plans that express three-dimensional landscapes by means of simple geometrical forms such as squares, circles, triangles, straight lines, radii, and spirals – an expression of the environmental language that in our age determines quality of life, the economy, and development.

Language is a means of communication based on a system of symbols with rules that permit significant information to be conveyed.

As an artist, my studio looks out over Nahal Mearot on Mount Carmel, a site where prehistoric human remains have been discovered, and there I conduct a dialogue in stone – the main material in my works – with nature, cultures, and the human spirit.

The present exhibition consists of carved stone sculptures inspired by two-dimensional plans (also on display) of geometric and architectural objects in real topography, as three-dimensional exhibits that create a topographical language of a different kind.

This new language describes the same objects using different signs, like hieroglyphics expressing findings from the lives of people in contemporary times.

Like Egyptian hieroglyphics or the new language of emoji, in which every sign expresses a concept, this three-dimensional language presents locations. The sculptures represent a location based on maps of an object located in the area in the plans in present-day life. The ensemble is located in an environment of archaeological sites, places that represent ancient life.

In this way, symbols link our lives today with the history and culture of this site and transmit them to the consciousness of the observers.

Movement, the Human Being, Creativity, Science – A Miraculous Combination

Movement – what we see from the window, from the hilltop,

From the moving car or train, bringing peace, tranquility,

A combination of movement and sound.

That same movement is within you when you dare to look into yourself:

The exhibition is the unique combination of all these.

The picture, feeling, understanding, knowledge, translation, initiative, action – these are the product on display.

Movement inward and outward – this is the experience, existence, creation,

The human being upon the earth…

A holistic look, an individual translation of life’s raw material… through movement.

The Department of Environmental Studies in the Porter School of the Environment and Earth Sciences at Tel Aviv University was the first graduate school in Israel dedicated to the research, teaching and sharing of environmental knowledge in Israel, with a wholly interdisciplinary approach. The department was established in the year 2000 to respond to the increasing need for knowledge, research and training in this essential field, and it offers a range of study and research programs for graduate students on an array of topics addressing contemporary environmental issues.

The department’s unique interdisciplinary approach facilitates productive interfaces between exact and natural sciences and the social sciences and humanities. The integration of environmental aspects into the various disciplines creates new fields of research and knowledge, which nourish the current evolution of thinking in Israel and globally.

As part of its overall vision, the department seeks to bring forth the wealth of academic environmental knowledge to the places where it is most needed, in all realms of Israeli society: national and local government, the judicial system, the education system, industry, private sector companies and public institutions. The school therefore maintains extensive contacts and partnerships with leading environmental organizations, government ministries, industry and other research institutions in Israel and around the world.

As part of these partnerships, we are glad to host this novel exhibition, that explores the connections between engineering, environment and art.