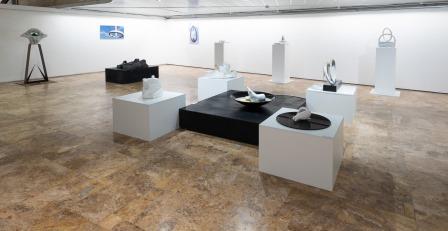 The series of new art works by Avi Sperber on the topic of love, which are on display for the first time at the Jerusalem Theater, is dedicated to his late wife Leah, who passed away before her time. The sculptures display poetry that crosses boundaries, romantic talent and professional skill worthy of admiration, combining the massive power of stone with the dramatic and touching carving by an artist’s hand.

According to Karl Jaspers, whom Sperber quotes in the essay he wrote for the opening of the exhibition, “Love cannot be grasped because it is an unfounded, assumed reality of the absolute consciousness.” This definition explains the artist’s decision to dedicate this artistic project to describing the day-to-day feelings that accompany his life and the experiences of memory in which he lives.

The result is a touching series of works that capture the viewers’ eye, inviting them to contemplate and even touch and feel the physical, but also the spiritual, power of the works. Each sculpture represents a feeling, a symbol and an idea that symbolizes a unit in the couple’s marriage, which lasted for fifty years. The allegorical sculptures, which represent a labor of love for the artist and dedication to his goal, are a kind of translation of the personal, intimate sights taken from the innermost parts of Avi Sperber’s spirit and brought out into the world. 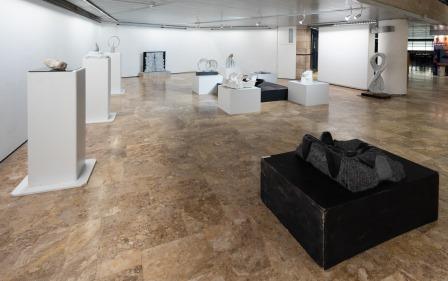 The legendary sculpture garden at the Israel Museum in Jerusalem, which contains the famous “Ahava” (Love) sculpture by Roberg Indiana and “Vertebrae” by Henry Moore. There is a certain symbolism in the new “addition” that Avi Sperber has brought to Jerusalem on the topics of love and vertebrae. A series of couples, worked in stone, embracing one another, powerful and massive circles of energy that commemorate an endless love: these are the sculptures entitled “The Romantic Utopia,” “Two Who Are One,” and “Constrained Connection.” The deep link and true and candid inner connection between the couple is symbolized by these sculptures, and illustrates them in the clearest possible way.

Other sculptures by Sperber bring us to the sensitive boundary of the language of the body and the personal, unmediated touch that he has given to each sculpture over the years. Avi Sperber’s work is typified by the connection between a precise choice in the kind of stone and the artificial materials that are connected to it, and the physical chiseling that he does by hand imbues them with strong energetic powers. He chooses well-known mythical symbols such as an eaten apple placed beside a shell, and creates images of organic plants, flowers, and petals that open to the world and presented, with their open hearts, to the world. In each of his sculptures, which link to the relationship between male and female, between himself and his masculinity and his wife and her feminity — in all of these, he uses sculptural motifs that are romantic, erotic, and poetic, and holds a silent dialogue with the flower works of Robert Mapplethorpe and Georgia O’Keeffe.

The endless love that is sculpted by Avi Sperber and that illustrates the memory that exists within him is given meaning in a work in the form of the number eight, which symbolizes perpetual motion. It calls to mind the braid of his wife Leah, and the etchings, in the form of human scratches that characterize the work, only intensify the sense of truth and yearning. The images of the narcissus, which is presented in “Narcissus,” such a feminine, vagina-like, and erotic work, and of a cracked human being, whose heart is cracked down the middle with light constantly shining through it, are the high point of the exhibition. These are joined by the impressive work entitled “You Took Me By Storm,” inspired by Alterman, which leaves the exhibition’s mark on the viewers.